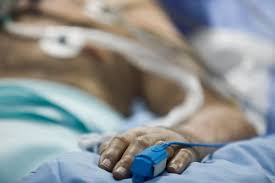 Postoperative Negative Pressure Pulmonary Edema (NPPE) is an uncommon but known life-threatening complication after general anesthesia.  It’s a form of noncardiogenic pulmonary edema that occurs in response to upper airway obstruction, often during the critical time of extubation at the end of surgery.  Patients attempt to breathe against a blocked airway either from obstruction, foreign body, or tongue swelling.  Biting down on a breathing tube can also cause this to happen.  This results in fluids shifting into areas of the lungs requiring rapid identification and intervention.

Some signs and symptoms of NPPE are fast respirations, shortness of breath, panic, pink frothy sputum production, and decreased oxygen readings soon after the event.

It’s often unrecognized within the postanesthesia unit (PACU), especially when it presents in milder forms such as low oxygen readings.  But it seems to be a higher risk among young, healthy, athletic males ( likely more capable of exerting that pressure level against the airway). NPPE can develop rapidly or up to 6 hours later.

Case Example:  A 21-year-old college baseball player had a nasal fracture repair under general anesthesia.  He was planned for a same-day discharge to home from the PACU.  At the end of the procedure, bloody secretions were noted at the back of his throat. The anesthesia provider cleared this with a suction device.  Upon removing the breathing tube, he developed a laryngospasm, a spasm of the vocal cords that temporarily make it difficult to speak or breathe, and a drop in oxygen saturation.  The anesthesia provider reversed this quickly with muscle relaxants and active ventilation.  He required 100% high-flow oxygen and diuretics to remove the excess fluids from his lungs.  However, he responded to the treatments quickly and remained another 4 hours in the PACU before meeting discharge criteria.

Prevention of NPPE high-risk patients after certain surgeries is accomplished through having an airway management protocol in place.  Missed or delayed recognition can cause an unplanned hospital admission or permanent harm depending on the severity of the hypoxic respiratory failure.  NPPE can be fatal if inappropriately managed.